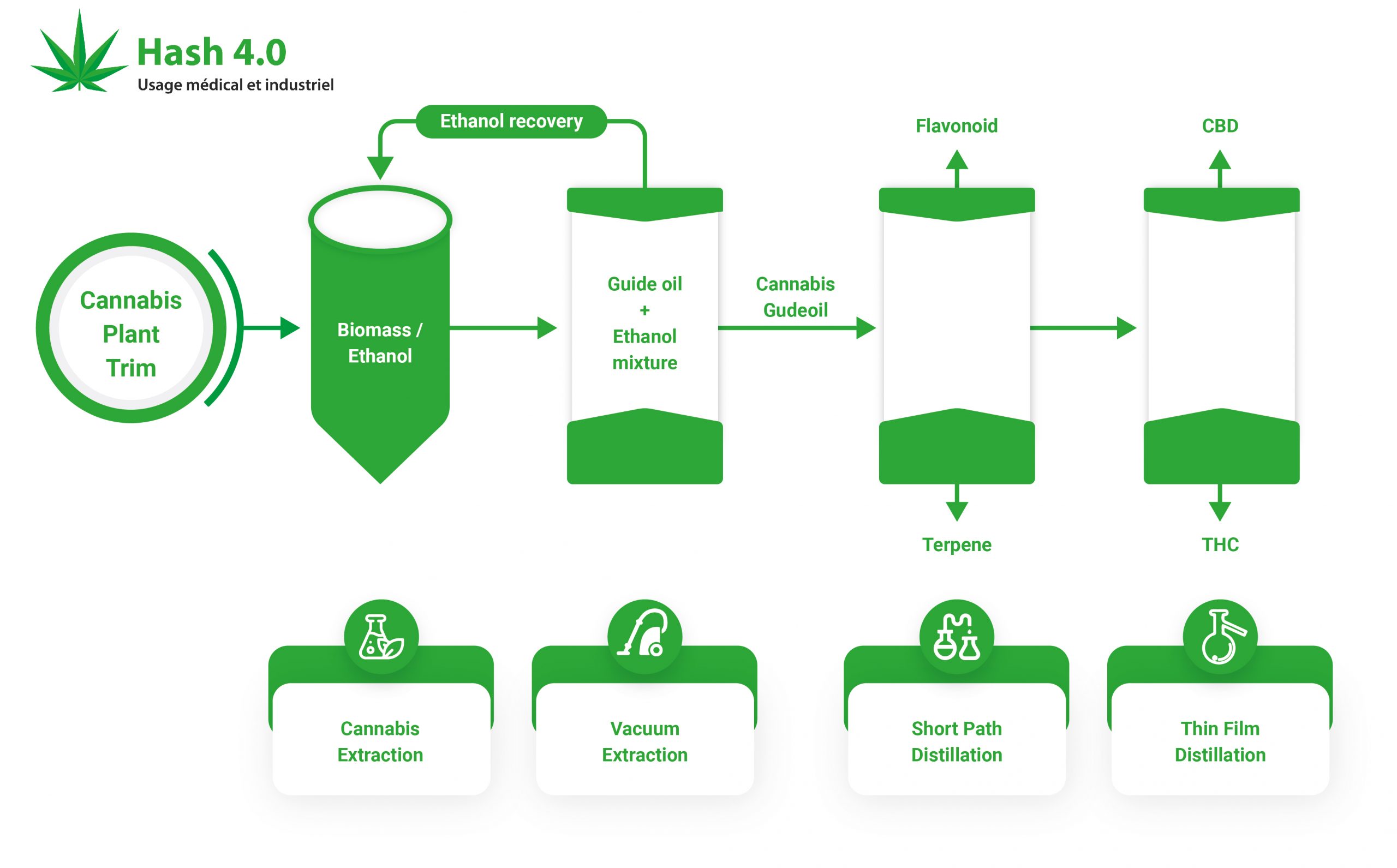 Vacuum distillation in the extraction of cannabinoids

Throughout the extraction process, an intermediate product consisting of cannabis oil and Ethanol is always produced. As a result, Ethanol must be eliminated from the mixture.  This is accomplished by the application of Vacuum Extraction.

This method is used to remove any remaining ethanol from the cannabis oil/ethanol combination following vacuum extraction. Due to Ethanol’s low boiling point, this procedure may be carried out at ambient temperature or with minimal heat input and a rough vacuum of 50 to 100 mbar in a lab or pilot-scale operation. This may be accomplished using liquid ring vacuum pumps that run on Ethanol as the working fluid. With the use of a condenser, the Ethanol may be re-liquefied and reintroduced into the cycle. When used in industrial settings, thin or wiped film evaporators can efficiently remove the vast majority of the solvent responsible for the formation of crude oil. Following vacuum evaporation, it is possible to extract crude oil with a THC/CBD content of between 60% and 80%.

It is compromised of 2 different steps:

Both the cannabis crude oil and cannabinoids include terpenes, which act as fragrant oils, and flavonoids, which act as carriers of bioactive flavor.   They must be separated by a distillation procedure. As the name indicates, short path distillation is one of the most widely used and successful distillation techniques available today.

Short-path distillation is an oil separation technique that takes into consideration the changing boiling points of the oil’s constituents at a range of temperatures and pressures throughout the separation process. THC begins to evaporate at 157° Celsius in the presence of atmospheric pressure, whereas CBD starts to evaporate at 160–180° Celsius. Individual terpenes and flavonoids have lower boiling points. To be successful throughout the distillation process, vacuum distillation must be used to limit the temperatures necessary to boil the different cannabinoids. Depending on the application, short path distillation may operate at vacuum levels ranging from 0.001 to 1 mbar. It is essential to gradually heat the oil while maintaining a constant vacuum level in order for the selective evaporation and condensation of terpenes and flavonoids to be successful. Thus, the extracted concentrate contains 99 percent pure THC and CBD.

THC and CBD are separated during the second distillation step, which is the last phase, employing a thin-film evaporator to accomplish the necessary separation. Although thin-film evaporators function similarly to short route distillation, they operate at a lower vacuum and a higher temperature. Ideally, distillation occurs at vacuum pressures of roughly one mbar and temperatures in the hundreds of degrees Celsius. To produce the euphoric/psychoactive effects associated with THC, it must be heated to 104 degrees Celsius, a process known as decarboxylation. If the proper temperature is not attained during the distillation step, the decarboxylation procedure must be carried out in an intermediary stage before the distillation step. Purified CBD and THC are obtained at the end of the process and may subsequently be used as active components in various applications.

What Role Do Vacuum Pumps Play in the Cannabis Distillation Process?

The use of heat during the distillation process, on the other hand, might alter the intrinsic composition of the chemicals present in crude cannabis oil. It is at this point that industrial vacuum pumps come in handy! The liquid mixture will be divided into various compounds if a vacuum pump is used to decrease the pressure and power the distillation process rather than heat to reduce the pressure and power it. The explanation for this is simple: the vacuum pump will draw at different pressures, and the varying pressures caused by the vacuum will separate the mixture into compounds with distinct chemistries resulting from the vacuum.

For example, combining vacuum pumps can be both economically and technically advantageous when trying to speed operations or prevent heat-sensitive products from being exposed to dangerously high temperatures. Consequently, it is critical to speak with a vacuum professional while selecting a vacuum pump.