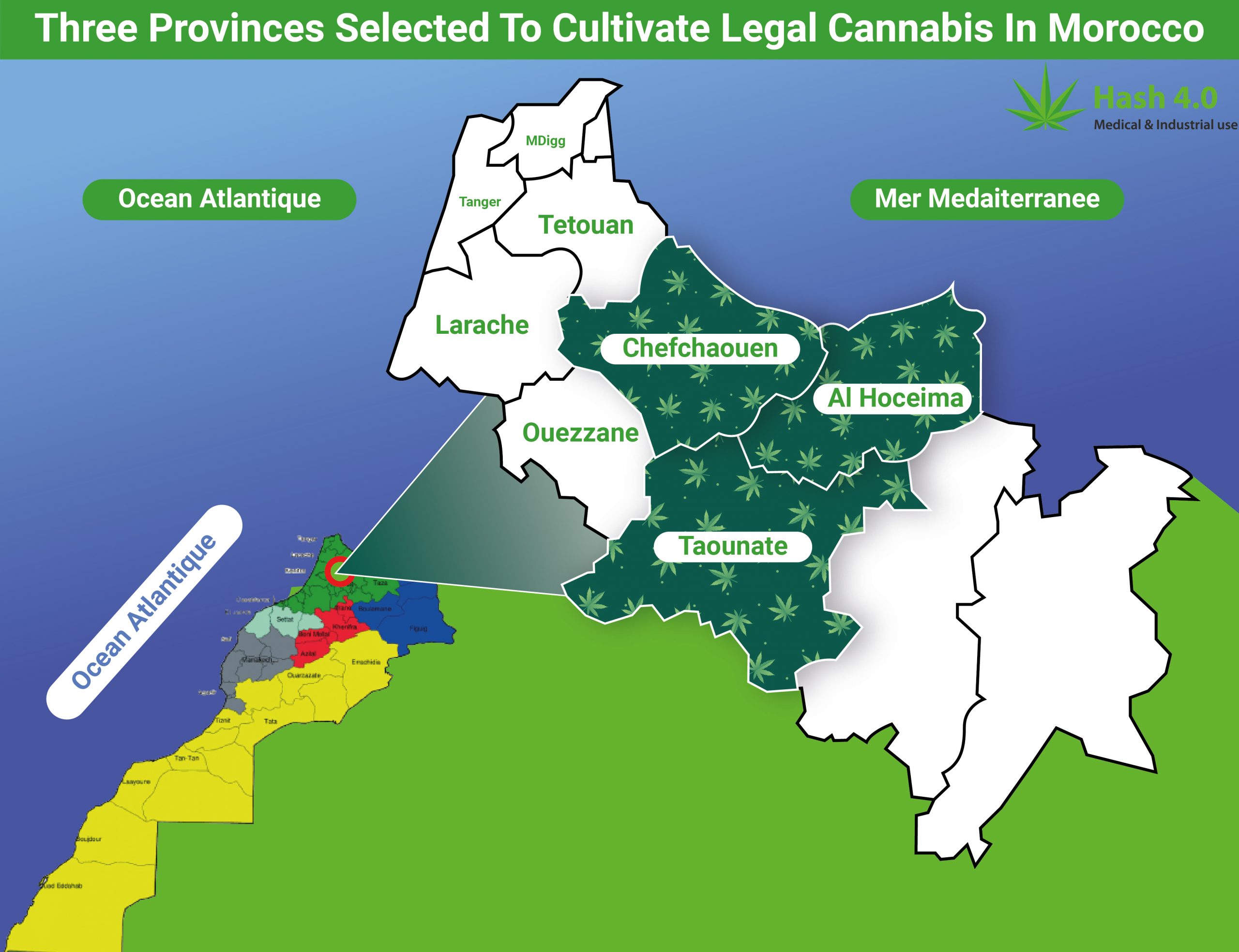 Cannabis has been unlawful in Morocco since the country’s independence in 1956, and the country’s comprehensive prohibition on narcotics was reinforced in 1974. Morocco has been cultivating cannabis for hundreds of years, and the country is now one of the world’s leading producers of hashish, according to the International Cannabis Trade Association. As of 2016-17, Morocco was the world’s leading supplier of cannabis. On May 26, 2021, the Moroccan Parliament decided to approve the use of cannabis for medicinal, cosmetic, and industrial applications only in 3 provinces.

What 3 provinces are selected to cultivate legal cannabis in Morocco?

These three provinces are selected:

These three provinces currently produce cannabis; thus, they were chosen as a starting point, with the option of adding more provinces based on the level of interest expressed by investors in Morocco and abroad.

The goal of the cannabis legalization law is to convert illegal crops that affect the environment into profitable legal industries that provide value, revenue, and jobs,“ according to the legislation.

The law restricts the cultivation of cannabis to only 3 provinces in northern Morocco (as discussed above), and it prohibits the use of the drug for recreational reasons in general.

What is the potential of the cannabis industry globally?

According to research published in 2019 by New Frontier Data on the worldwide cannabis business, the global total addressable cannabis market (legal and illicit) is expected to be worth USD 345 billion in the top five regional markets:

Precedence Research, on the other hand, recently published a study that estimates the global legal marijuana market size to be worth USD 17.5 billion in 2019 and forecasts it to grow to a market worth around USD 65.1 billion by 2027, with a compound annual growth rate (CAGR) of approximately 17.8 percent between 2020 and 2027.

The law, which recognizes the 3 provinces (Al Hoceima, Taounate, and Chefchaouen) that are permitted to grow cannabis in Morocco, allows the future possibility of including other regions in the legalization process. This also leads global and domestic investors to grow with the country’s economy.

Hash 4.0 – Cannabis for medical and industrial use

Hash 4.0. offers the consulting, engineering, and digitalization of the Cannabis process. We focus on the refinement of cannabis oil ( CBD/THC) for Medical as well as Industrial uses in Morocco.